Part 2 of my 13 Ghost Movies of Halloween! 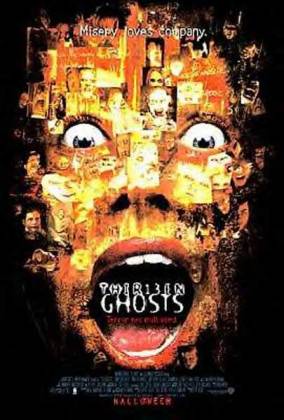 A family that recently suffered the loss of their home and their mom in a terrible fire inherits the estate of an odd, estranged uncle who was a collector of very unique things and died under mysterious circumstances. Included in this estate is a house with more amazing secrets than just how its clockwork structure works…

Admittedly, the idea is actually pretty cool. The idea of some eccentric collector going so far he wants to collect GHOSTS and keep them in his ghost prison and it going horribly wrong is really interesting. And the family inheriting their crazy uncle’s estate without warning is such a classic way to explore this really unique idea. Honestly? Story alone, ignoring the execution entirely, this is a great story. Really fun.

The acting is horrible. Holy crap, this movie is one of the worst-acted things I’ve ever seen in my life. It’s crazy how bad it is. It’s also really weird since obviously Tony Shalhoub, Matthew Lillard, and Embeth Davidtz are all really good actors. This movie is like the weirdest thing I’ve ever seen on how bad it can actually be, and turning good actors into horrible ones is almost an achievement, honestly.

This is basically what I assume turned all those great actors into horrible ones: the worst-written source material possible and shitty directing. Seriously, it’s almost a talent to be such a bad director that you can make these people suck. And while the story is good, the way this is written is just laughably bad. I’m not kidding, there were lines delivered in some places that had me going “WHAT THE HELL?!” and laughing, they’re so, so, so bad.

Okay, the cinematography isn’t great but the fact they were able to film a movie in a bunch of glass sets at all is pretty impressive. Reflective surfaces are a filmmakers worst nightmare, and this whole movie is one big reflective surface. The house is just amazing. I give this movie an entire extra point just for how inventive and beautiful that house is and the way it’s captured on camera is just really fun. So, while it’s not amazing, the cinematography is way better than the writing, directing, and acting, which is at least somewhat of a positive.

Is It Worth Watching

YES! It’s the worst movie I’ve seen in a long time, but to the point that it’s good. It’s kind of comparable to The Covenant but with 100% less homoeroticism and twice as much ‘oh wow this is so bad its good’. Genuinely fun, absolutely terrible, and utterly rewatchable. I saw like a scene of this when I was like 12 and was terrified, but honestly if I had seen the whole movie, I would’ve realized this is fantastic fun.

Seriously, watch this. It’s so fun. You cannot imagine how much fun this movie is. Especially if you have a few drinks and then watch it, because that would just make it so much more fun I bet. It’s terrible but in the best way ever. I’m rating it so low because it’s shit, but it’s shit in a good way.