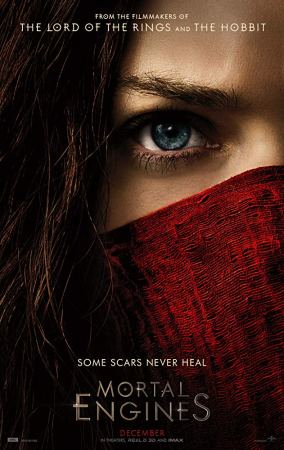 In a post-apocalyptic world in which cities move on wheels, Hester Shaw (Hera Hilmar) hopes to take out the leader of London, Thaddeus Valentine (Hugo Weaving), because of his role in her mother’s death. Aided by an unsuspecting ally, Tom Natsworthy (Robert Sheehan), Hester’s only goal in life is to kill Valentine and make him suffer for what he did to her mother.

Holy shit, the creativity to come up with the idea of predator cities and roving cities at all is just amazing! I had never heard of this book, but now I NEED to read it! Holy shit, I love this story so much. The idea of Hester getting revenge on her mother so long after her death was just amazing, nonetheless the premise at all!

I will admit, I can’t say it was oscar-worthy for anybody, but nobody in this movie wasn’t at least ‘good’. Everything in this movie was solid acting. There wasn’t a bad actor in this whole thing. Hester was pretty average, but honestly? The stand-out acting roll was definitely Jihae. I don’t know her so I don’t know why her name is only just Jihae, but there were moments her eyes did all the talking. THAT is the mark of an AMAZING actor in my book. Whoever you are, Jihae, I WILL be looking out for you in the future!

I mean Jesus, the script may not be perfect in some places, but in general, the direction is AMAZING! There’s very few ‘average’ scripts that can be directed to be so amazing, but this is one of them. I can feel Peter Jackson’s influence, but honestly, the director gets a lot of credit for this one. The script does lack in places, which is honestly the only reason this movie isn’t a 10/10, but the direction? It’s just GREAT. I’m not familiar with this actor, but this one was so good I feel inclined to seek out more works by this director.

My god with such visuals, how can you NOT admire the way its shot? I didn’t research, but surely most of this is CGI. Either way, it’s PHENOMENAL! Gods, this movie is so beautiful. The look of London ALONE is just mind-blowing. I really, really loved this. Like CRAZY loved how it looked.

In spite of stupid Rotten Tomatoes and it’s current 28%, and in spite of all the people who said it was ‘meh’, I can only tell you this is by far one of the best movies of 2018.

The story was creative, the opening sequence was the best of 2018 altogether, the story was never boring, the acting was never bad, and I honestly was FULLY engrossed the WHOLE time! I had never heard of Mortal Engines before this, and now I want to go read the book and I hope there’s a whole series! Honestly, the opening sequence and the final battle were both so good that they were beyond worth watching it for those scenes alone!

This was a movie about survival and revenge and right and wrong and just so much HUMANITY and yet, shockingly, I found myself crying over the fucking Terminator of this world. Like what the fuck? How good do you have to be to make me cry over the TERMINATOR?

Is it perfect? No. I feel like there’s a LOT of information missing that we have to infer. However, the story does NOT suffer from that. I’m willing to overlook all the shortness of information because of the way it’s written and the way the story progresses.

While I haven’t seen as many movies this year as last (thanks depression) I can only say that I LOVED this movie and I don’t doubt that in even my best year, this would be at the top of my list!