Part 1 of my 13 Ghost Movies of Halloween! 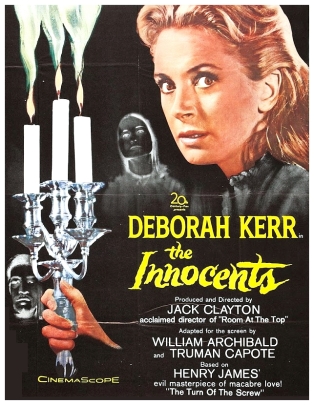 A governess, Miss Giddens, is hired to go out to a country estate and care for two children, Flora and Miles, since their uncle, a world-traveling bachelor, has no desire to have any involvement in the childrens’ upbringing. Upon settling in, Miss Giddens begins to suspect something very wrong is going on in that estate.

The story is basically Turn of the Screw, which I didn’t realize until I was in the middle of it. Which isn’t a bad thing, that’s a great story, I just didn’t look into this one before I watched it. If you’re unfamiliar with Turn of the Screw, basically, lady becomes governess and finds out the place is hella haunted. In this case, it’s haunted by the ghosts of the former groundskeeper and former governess, who were having an illicit affair. She begins to suspect something is wrong with the children, and it’s all linked back to the groundskeeper and governess.

The acting is pretty good bearing in mind that it’s 1961, when over-acting was still a big thing. The little children in particular are really good and CREEPY AS HELL. Miles scares the shit out of me. The way the children act less dramatically really cements how scary they are in the whole ordeal.

It’s very interesting the way that this movie is written in such a way that you’re not ever really sure what’s coming next. By that I mean that it’s more step by step and less ‘big picture’. One thing I never saw coming was that ending. It was a biiiig shock. Also, the way its directed builds suspense with small things instead of hokey dramatics.

The ghost outside the window is scary as hell. Holy crap. I know that’s not super impressive, but it’s just a visually appealing movie for a horror.

Definitely! I don’t have tons to say because it wasn’t something SUPER AMAZING, but if you want a spooky ghost movie that’s not too scary and isn’t at all gory, this is a great one to give a shot. It’s basically just a solid adaptation of Turn of the Screw so any literature junkies will have a good time with this one, too.