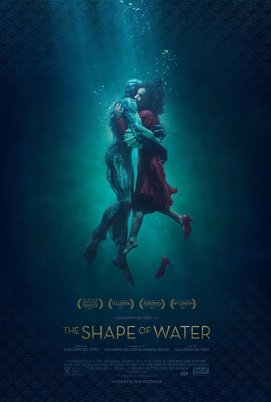 Set in the 1960s, a lonely janitor, Elisa, meets a creature just as lonely as she is. When she falls in love with the fish man being tortured in the lab of the secret research facility she works at, it’s up to her and her friends to save his life.

Okay, so, I knew this was going to be weird. I knew that to start with. I knew going in that this movie would be <i>out there</i>… and yet it still was just SO MUCH weirder than I ever thought was possible. I liked it, I think? I honestly don’t even know. This movie went beyond weird and into ‘what the fuck did I just watch?’ so I don’t really know how well I liked the story.

It was very Guillermo del Toro, let’s just put it that way.

The performances in this movie are magnificent. Sally Hawkins is incredible. I’ve never seen her act before, but that was just fantastic. Also, Richard Jenkins was amazing, too! Honestly, there wasn’t a bad performance in the movie, right down to our old pal Doug Jones, the master of monster makeup!

This movie was so creative and so well done that I cannot give enough credit to the writing and the direction. There wasn’t a scene that stood out as ‘off’ for me in the whole movie. I saw this in a near-empty auditorium and was free to gasp and clutch at my seat as dramatically as I wanted and I did, oh man I did.

Guillermo del Toro is just a legend. That’s it.

There are sequences in this movie that I think will be studied in schools one day. This movie uses color and light in a way that is so incredibly awesome that I can’t put into words how much I love it. I love the use of water. That sounds silly, it’s the title of the movie, but the way water is used in even small ways is just so beautifully shot, because filming with water is not easy. It’s a tricky thing to get what you want on the camera when it comes to water, and this movie does it well.

Everyone should see this movie. It’s weird beyond measure, but it’s just so beautifully told and I cannot praise the acting and storytelling enough. The only reason this movie isn’t getting a higher rating from me is the way that I think it was almost <i>too</i> weird for me. I didn’t <i>feel</i> it. I know the writing was there, the acting was there, the direction was there… I just still didn’t feel it. I think it was too weird to me to connect to properly.

The basic story, however, is one that is magical and beautiful: a person who feels lost discovers her purpose in life and that purpose is to love someone that nobody else does. It’s just so beautiful of a story. It takes skill for Guillermo del Toro to turn a simple story into something so outlandishly strange that even I can’t get too incredibly attached. It’s a great movie, even if I can’t love it as much as some do.