Let’s just start by saying 2017 was a great year for movies! I saw so many amazing movies in 2017 that I had a very hard time picking this top 10. I saw 42 films of 2017 and 34 of those were at the movies, which is an all-time high for me, and yet my short-list for the top 10 was still 19 movies long. Weeding out my VERY FAVORITE movies was so incredibly hard. Honestly, there were only a handful of movies I saw this year I wouldn’t watch again, and there are a few I saw that I’ve already bought and watched half a dozen times over again.

(Side note: In making this list, I realized that DAMN 2017 was a great year for women in movies!) 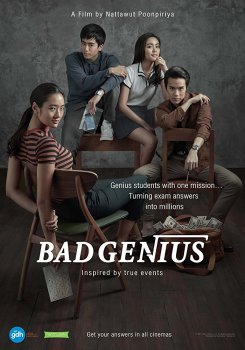 I only recently saw Bad Genius and I’m glad I managed to fit it in before the year ended. What I loved about this movie is that the suspense is sooooo palpable. Jesus Christ I’ve seen horror films with less suspense than this manages in each tense scene. The premise is really interesting, it’s very well written, and the acting is great. This is just an all-around wonderful ‘heist’ movie and I’m lucky I stumbled across it looking for another Thai movie I’d watched last year. If you haven’t heard of this one – and you may not have since I never did – go find it! It’s just fantastic.

Space, science, history, and women, what more could you want from a film? Hidden Figures is the movie I saw on my birthday in 2017 and it is without a doubt one of the best birthday presents I ever gave myself. This movie is funny, moving, thrilling, and absolutely beautifully acted. It’s still the only movie I’ve ever been to where the audience applauded when it ended, so clearly others agree with me about this one. While this one was released some places in 2016, for me it was released in 2017, so it was always going to be on this list.

This movie turned out to be a rather divisive movie this year. People generally loved it or hated it. I even did a little mini-study on whether this was truly a movie for women and discovered that 2/3rds of women polled loved it and 2/3rds of men polled hated it, which kinda confirms my theory that this is a movie women enjoy more than men. That’s really why I love this movie so much, it’s funny in a way that most comedies aren’t. Even other ‘female driven comedies’ often don’t have realistic women. This movie is full of jokes that make more sense if you’re a girl, and it’s just fantastically funny. I loved this movie so much I bought it and have watched it on bluray about ten times already. It’s just a good movie that does raunchy comedy in a way that is ACTUALLY funny and not offensive, which is so hard to find. It doesn’t bog everything down with too much sentimental stuff like a lot of ‘women’ comedies. It has a little bit of this ‘friendship dynamic’ stuff that’s interesting, but it’s not over the top enough to distract from the fact it’s just a very funny film. 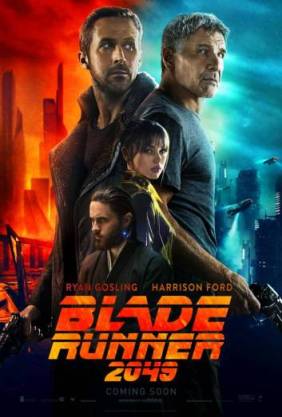 It’s kind of hilarious how in the middle of a list that’s going to as a whole be pretty damn feminism forward you find one of the least feminist friendly movies I liked this year, but not every movie can be perfect. However, this one is really freaking good. In another case of ‘love it or hate it’, Blade Runner 2049 was just one of those movies that ticked a lot of boxes for me. I love stuff about AI and Androids and the ethical question of ‘when does a person become a person?’ in the case of intelligent AIs. This movie was pretty much right up my alley for a Science Fiction film. And of course, the visuals are just freaking unbelievable. Dear God, this movie is the most beautifully shot movie I saw all year, and I could look at that Vegas scene for an hour and never get tired of it. So while it was pretty shitty with how it treated women, that was honestly the only flaw this movie had for me.

Oh, Wonder Woman. This was one of the biggest surprises for me all year, honestly. I didn’t expect much from this movie, because DC movies notoriously are NOT to my taste. When I walked out of that theater, I was shell-shocked at how much of a 180 from that feeling this DC movie was. My goodness, you guys, this movie moved me in ways I never expected to be moved. I’ll quote my original review because I explained it best there:

I didn’t expect to be as deeply affected by the fact that this film has a woman who can’t be hurt. Most superheroes, not just women, can still be harmed, and we know she can because the other Amazons died at the beginning, but by having her deflecting bullets with her armor it struck me really hard that I live in a world where women are murdered all the time just because we exist. All the time you hear stories about women being murdered by their partners, women being murdered for refusing to give a stranger at a bar their phone number, honor killings for rape victims, honor killings for adultery, you even see news stories about women being murdered by men for being pretty and a ‘temptation’.

And when I saw Diana running across No Man’s Land deflecting bullets the words, “a woman who can’t be hurt by men” popped into my head and I almost cried.

Also, that No Man’s Land scene will forever be one of the coolest movie scenes of all time.

I never thought a comedy about a woman in a coma would be a top 5 film for me before 2017. But wow, how wrong was I? Oh man, this was so touching and beautiful and still seriously funny. I already knew the story behind Kumail Nanjiani and his wife’s illness when they were first getting together, but this was just such a moving story to see played out on screen. This is without a doubt one of the best comedies I’ve seen in years, and I knew when I watched it that first time that it would be on the top 10 list somewhere, and look! It is!

Look, another ‘love it or hate it’ movie! Yep, as you can guess, I loved this movie. I think all the things people hate are the same things I loved about this movie. I loved the way all the characters are very fallible in this movie. I loved how some things were just futile and all we willed them to succeed in didn’t necessarily end in success. It was just a really, really good movie and I had very few faults with it. I plan on watching it again ASAP, because this is one I think you can probably watch ten times and find something new every single one.

Of all the movies I saw in 2017, Baby Driver is easily the one that every time I watch it, I love it more. God, it’s just so good. There’s nothing else to be said, it’s just SO good. I love these characters, I love the story, I love the way the whole thing is basically one big music video, I just love everything about this movie. The only reason this movie isn’t my #1 is that 2017 was so freaking amazing for film that two movies were even better than this practically flawless film. 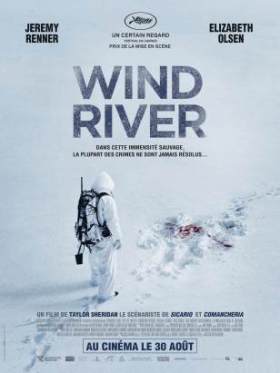 I agonized over which of my top 2 films would be #1 and which would be #2 because both of them were fantastic movies that shared a lot of the same themes in VERY different movies. It physically hurts to put Wind River anywhere but in #1, but that shows you how good this year was for movies. This movie is just amazing. It’s beautifully shot, it’s fantastic sounding, it’s about a very real topic that needs to be respected the way this film respects it, and the performances in this are amazing. If there was any justice in the universe, both Jeremy Renner and Elizabeth Olsen would win hella awards for this movie. Also, it’s funny that this is the second time, Taylor Sheridan gets the #2 spot on my Top 10 list, lol.

I never in a million years thought an animated film could be #1 on my list in such a good film year, but Coco is just something different than anything I’ve ever watched. Not only is it the best animated movie I’ve seen in years, it’s possibly the best Pixar film I’ve ever seen… the spot previously held by Toy Story. This movie is so beautiful and visually stunning and oh my God, I cried more watching this movie than I did watching anything else (besides Lion) all year. And like I said before, it’s hilarious that this and Wind River had a lot of the same themes in a very different way. The way this movie approaches the concept of family, culture, grief, death, and memory is just amazing. I love every second of this movie, and the only reason it’s not a 10/10 film is that it was slightly predictable, but honestly, I don’t even care. It’s the best movie I saw all year and I cannot WAIT until I can own it and cry over it in the comfort of my bedroom.

And there we go! Another year in the books and another Top 10 list to go down with it. What were your top 10 favorite films of 2017? Let me know!