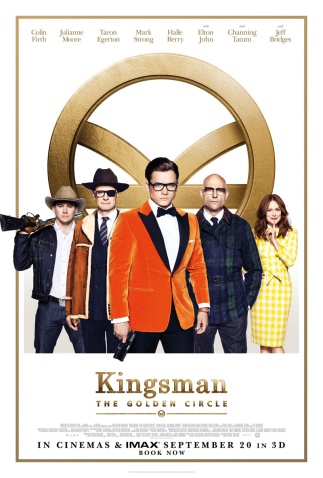 Set a few years after Valentine tried to take over the world, Kingsman is destroyed by the leader of the Golden Circle drug cartel, Poppy (Julianne Moore). The only surviving members, Merlin and Eggsy, must follow the only clue they have, a bottle of Statesman bourbon, to find help in stopping Poppy once and for all.

The story has good ideas but it’s poorly executed. There are so many threads here and there that don’t get explored, but overall, it’s just as topical and entertaining as the first Kingsman movie. I think where it falls short mostly is how random Charlie being brought back is. There’s no real reason that was necessary, and there’s no real reason after the first one for the whole story to really happen. It’s one of those movies where it’s good, but it wasn’t necessary. One of my biggest complaints with Guardians of the Galaxy 2 was the same thing. The events of Kingsman: The Secret Service didn’t really NEED this continuation the way this story plays out. They basically wipe the slate clean and this is just another story. Which makes sense in the realm of ‘this is a James Bond spoof’, but it just doesn’t need to exist.

However, independent from the first movie, it’s a solid story.

The acting is pretty good. Taron Egerton continues to be an amazing talent, Mark Strong is Mark Strong, and Colin Firth is Colin Firth. The real standout here is Julianne Moore. I’ve seen her on serious things and in comedies, but rarely does she, to me, do comedy as well as drama. In this movie, she’s just really good. I absolutely adored Poppy even if she is kind of evil.

Also, I’m not sure he was even acting, but Elton John was soooo fun.

The writing and directing are where I think this movie’s story went wrong. There is so much tonal whiplash going on and it isn’t a good thing. The scene progression doesn’t feel really right in a lot of places. I don’t know if it’s just because of the story or what, but the pacing just feels off. There’s a lot of short scenes that don’t really work together with the other scenes leading up to and following it. There are some things that just don’t seem to have any reason to be there. Like Channing Tatum… what’s the point of him? Don’t get me wrong, any excuse to see him half-naked is fun, but honestly, what is he really doing there? He doesn’t make it ‘personal’ that much because we barely get to know him. Tilde makes the whole thing more personal, he isn’t necessary. Also, Ginger isn’t really necessary and I feel like she’s shoehorned in to make sure there’s one girl spy for sure. (And to have Halle Berry in the movie.)

There are some really great shots in this movie, just like in the first one. I love this highly mobile camera style in these movies. While this one lacks some of the wow-factor of the first, there are still sequences that make you go, ‘whooaaa coooool’ and I love it! Nothing is more fun than slow-mo fight scenes, right? The big action moments like car chases and shootouts and the whip-fighting is all just so fun. I’m a big action movie person, and this is one of the more impressive examples of how to make an action movie FUN.

It’s definitely worth watching, even though I do find it a bit disappointing after the first one. This movie feels like the creators saw the success of the first Kingsman and then decided to just phone it in, knowing they would have a ready-made audience. This movie’s choices in many places go beyond ‘makes fun of James Bond’ straight into ‘is tacky’ and it’s a letdown. While it’s mad fun, and when not compared to the first, is a solid film, to me as a huge fan of Kingsman: The Secret Service, even though I set my expectations low, this still managed to fall short of those lowered expectations.

What made the first Kingsman so special was the ways in which it subverted the movie spy stereotypes and even, in many ways, hyper-masculine stereotypes, and more importantly, it infused heart into a spy movie in ways that made you really care about the characters instead of them being set pieces like in a James Bond movie that it parodies. This movie lacks all of those things. The only parts of this movie that made me FEEL much of anything were the really sad ones, which is just annoying, because I was so ready to care about the things going on, but this movie fails to evoke those emotions.

Kingsman: The Golden Circle is fun, fast paced, fucking HILARIOUS, and an all around solid film, but it is very shallow and superficial compared to Kingsman: The Secret Service and I really think that a person who wasn’t a big fan of the first will enjoy this movie more than those of us who have been waiting impatiently to get more of what the first one gave us, which is a spy movie with a soul.