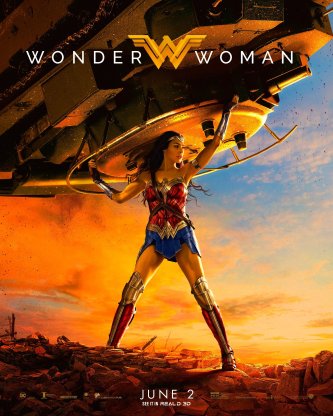 Diana, princess of the Amazons, has always learned of war and the outside world, though she has lived in the paradise home island of the Amazons. When a pilot stumbles upon their hidden island when his plane crashes into the sea, Diana learns of the ‘war to end all wars’ that is taking place in the outside world, and she is determined to carry out the fated duty of the Amazon and kill the god of war, Ares, once and for all, so that his poisonous influence over mankind can end and peace everlasting can begin.

This story is really good. I don’t know shit about Wonder Woman and yet I really enjoyed this story. I loved Diana’s background and I loved the steps through which this film goes to reaching its end. It’s a very balanced story that does not feel nearly as long as this movie actually is. I was stunned to see the run time on this film because the story never lulled!

This is a very well acted film. I wasn’t expecting too much, but Gal Gadot is really good here. There are some moments where she’s not the greatest (very few but once or twice she over-acts), but she’s really good. I’ve never seen her before, but this was a great introduction to her.

Chris Pine was incredible in this! I didn’t expect that much of him either. I know he’s a good actor, I’ve seen him in a few things where he was mind-blowing, but for a superhero movie I expected ‘showy’ Chris Pine, not ‘natural’ Chris Pine. This was a top 5 performance for him, definitely.

I really dug the rest of the cast, to! I didn’t expect to like the supporting cast members as much as I did, but this was a great one.

This movie’s writing and direction is so good. There are so many little moments (won’t bother to list them) where I expected the direction to go a different way than it did, and the way it DID go is way better than what I expected.

I like the writing in this film because this movie does what so many don’t bother doing, and that’s focusing on the humanity of it all. It’s part direction as well, but it’s a very writing-centric thing to have the film touch on all these issues of human nature. I adore that it talks about things from the perspective of someone who doesn’t understand them to do so as well. There’s a part where, minor spoiler, a character who is proclaimed to be a crack shot can’t do it, and when she says, “For someone who said he could shoot, he didn’t seem that good,” (paraphrasing) and we know that she doesn’t know what PTSD is. The same as when that character is shown having a nightmare. We’re getting a look at PTSD through the eyes of someone who has no concept of these things, and it makes it even more powerful.

Similarly there are two parts that touch on racism and she doesn’t understand it. Once, a character talks about how his dream was to be an actor but he’s the wrong color, and another time, a Native American character comments on how over in Europe, even though there’s a horrible war, he can be free, because the last war took everything fro his people, and when she asks who took it, he nods to his friend and says ‘his people’. It manages to talk about the complexities of racism since obviously not every individual is to blame for what their people did, but you can’t pretend just because of that it doesn’t matter.

This even gets talked about regarding the Germans through Diana’s lack of understanding about humans. She thinks that the only reason the Germans could possibly want to hurt people is because of Ares poisoning their minds. She doesn’t understand how it’s possible for people to be anything besides good without some outside influence. This movie has so many scenes that are nuanced in the way that humans work and seeing that from Diana’s point of view could have been done in such a preachy way, but it manages to never do that. It’s written with such care that this delicate balance holds.

And though I haven’t talked as much about gender because I’ve chosen to not bother since so many other people have probably said it far better than me, I will point out one thing that has to be said: I didn’t expect to be as deeply affected by the fact that this film has a woman who can’t be hurt. Most superheroes, not just women, can still be harmed, and we know she can because the other Amazons died at the beginning, but by having her deflecting bullets with her armor it struck me really hard that I live in a world where women are murdered all the time just because we exist. All the time you hear stories about women being murdered by their partners, women being murdered for refusing to give a stranger at a bar their phone number, honor killings for rape victims, honor killings for adultery, you even see news stories about women being murdered by men for being pretty and a ‘temptation’.

And when I saw Diana running across No Man’s Land deflecting bullets the words, “a woman who can’t be hurt by men” popped into my head and I almost cried. I never expected to be so deeply affected by a female superhero, because though I’m a feminist, I didn’t expect to feel any real difference in her than in male superheroes. But I was.

The cinematography is good. It’s nothing spectacular, but it’s good. There are some moments where the CGI is a bit shit, and some could say there’s too much slow-motion going on, but I didn’t mind those things. I like the color palate used, the gritty ‘war film’ look is a favorite of mine, but it’s nothing special.

All in all, this is a good looking film, but there’s nothing super special other than some REALLY badass fight sequences.

The best part of this film visually is the part where this woman is like the lovechild of Legolas and Black Widow doing this super badass aerial maneuver with a bow and three arrows that drop three bodies. That scene is genuinely when I went ‘oh shit, this is gonna be GOOD’.

Wonder Woman is one of the best superhero movies I’ve ever seen. Full stop. I didn’t care much about seeing this movie because I don’t tend to watch DC films (I haven’t watched a DC movie since Batman Begins and I hate that movie, which is WHY I haven’t seen one since really), but it looked pretty good in the little clips shown on late-night talk shows, so I thought, ‘okay, this sounds fun’. Also, I liked the whole ‘feminist film’ thing a lot obviously, though I worried they wouldn’t actually succeed at doing it right (instead, we got a film that finally gets badass female character RIGHT).

So as you can see, this isn’t a movie I’ve been anticipating, the success or failure of this movie didn’t matter much to me, and I expected a good time after all the positive reviews, but nothing on the level of my favorite superhero movies.

The only reason this movie doesn’t get a 10/10 is because I would have liked to know more about the Madame Poison lady. I wanted to learn what happened to her face, where she came from, where she disappeared to, ect. Honestly, if we had gotten more information on her, this film might have made my third 10/10 ever. I loved it that much.