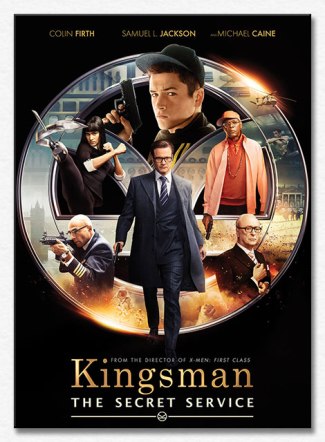 A young man with a troubled home life is drawn into a life of spies and super villains after a chance encounter brings an illustrious spy with a need for an apprentice into his life. Eggsy Unwin must outlast other candidates to join a spy network called Kingsman all while his mentor tries to figure out what the newest threat to the world is and how to stop it.

Overall, this is a unique and intriguing story that I really enjoy.

While this film doesn’t really draw on any BIG performances, I really think they’re all pretty good. This movie is just full of big talents. Obviously, between Mark Strong, Colin Firth, and Samuel L. Jackson, you’ve got an all-star cast there. Also, Taron Egerton is an amazing actor! He is a fairly young guy without a lot of stuff under his belt, but I’ve actually seen everything he’s in – not even on purpose, I discovered this when I went to find more stuff he’s in and realized I’ve seen it all – and he’s FANTASTIC!

(You ever seen Testament of Youth? He will rip your soul out in that film)

The only thing that really is kind of ‘wtf’ in this movie is Samuel L. Jackson’s weird lisp thing. I don’t really know what the point of that choice was, but it’s not that bad.

This film is so well written. I love James Bond movies, but they have so many things that piss me off, and though this is meant to be kind of a ‘parody’ of James Bond, mostly what it does is take out all the shitty things about spy movies and inject humanity into the characters.

My favorite thing about this entire film is the fact that everybody in it recognizes the lives around them and the consequences of their actions. Sure, the bad guys don’t care as much, but even then, they made the villain someone who hates violence and upon shooting someone says, “That feels terrible!” because killing someone in cold blood can’t feel good for even the most cold-hearted villain, but in spy movies even the good guys shoot people without even flinching. And as for the ‘good guys’, we have a spy that’s inevitably killed dozens of people at least in his lifetime, but upon killing a bunch of pretty horrible people he is visibly shaken and horrified at what he just did, whereas James Bond blows up a building full of people and walks it off like he didn’t just kill fifty innocent people. This guy kills not-so-innocent people and shows an actual human-like reaction, and it’s wonderful.

Another thing I love about the way this film is written is how it takes the typical spy movie sexism and totally wipes it off the board. There’s basically no real reference to gender differences at all. Even beyond ‘yeah, a girl who kicks ass!’ which is nice but not always ACTUALLY a positive gender role example, we have something as simple as the fact all the recruits are living in one dormitory with group showers and a row of toilets and there are members of both gender living in that dorm. There’s literally no concept of gender separation between the spies, even when it comes to seducing a target. Male or female, they’re all sent to seduce the same person. While this might not even register as something important to many viewers, I LOVE this, because it’s like the antithesis of gender roles and sexism in spy films to have not just badass lady spies who aren’t sexualized but to literally have the gender of the spies be absolutely ignored.

The only thing that I question in the direction of the film is whether or not they meant for it to be so goddamn homoerotic. I’m not sure what the directors thought they were getting out of Colin Firth and Taron Egerton’s scenes together, but rather than ‘kindly uncle figure’ they get ‘sugar daddy’. I’m not complaining, if I was Eggsy I’d TOTALLY have a crush on Harry, but I’m still pretty sure that wasn’t the intent. It comes with the way they interact. The scenes are set up somewhat ambiguous but their tones of voice and expression reads hardcore sexual tension in most every scene they’re alone in.

A good example of this would be the scene where Eggsy shows up at the tailor shop. For anyone who hasn’t seen the film, let me set a scene for you:

Young man who just escaped from his mom’s abusive boyfriend comes to a tailor shop after hours because the older gent who got him out of jail earlier told him to. He gets there and it’s dark in the shop with the only light being from the fire beside which a handsome man on the far side of middle age sits sipping a whisky. The young man looks at him and says, in a soft, almost flirtatious tone, “I’ve never known any tailors, but I know you ain’t one” to which the older man chuckles and rises and then proceeds to take the young man into one of the dressing rooms in the tailor shop, stand him in front of a mirror, and in an equally soft tone asks him to look at himself while standing right behind him and starts talking about his potential to do great things and how he would love to show him a new world in which he can do great things, all while referencing Pretty Woman…

Come on, what the fuck else would you see that as than sugar daddy??? And that’s just one scene, basically every time they’re in a scene that’s just the two of them, it comes across the exact same way. I really feel like the director either missed the mark ENTIRELY or I missed the mark that says that’s exactly what it was meant to be read as.

This film has these really awesome action scenes with a very active camera and very interesting pans and swivels that provide some long-takes that are actually not long-takes because they hide secret cuts, and it’s just really fun and different. It’s not your standard action film camera work. If anything, I would say it kind of reminds me of a Wes Anderson film in places, especially with the utilization of pans as well as the colors used. I just really love how this film looks. It’s got really great cinematography in my opinion.

Kingsman: The Secret Service is genuinely one of my favorite movies. I own it on DVD and I have watched it possibly more than I’ve seen any other film I own besides Avengers and Captain America: Winter Soldier. It’s just such a fun movie, and it’s a great film for spy movie lovers who hate the coldness of traditional spy movies. It has so much heart and so many amazing characters. I didn’t talk much about Roxy and Merlin in the review because it was running a little long, but all of the characters, including those two, are so interesting and you just really love them.