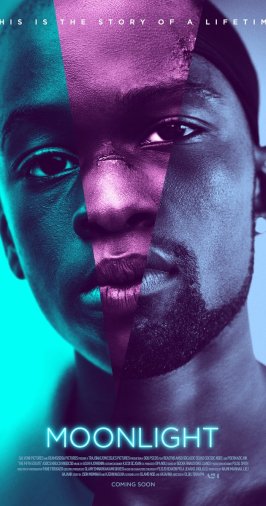 The story of the life of a boy named Chiron growing up in a rough neighborhood in Miami from childhood to adulthood.

It’s a really interesting story that is unlike anything else we’ve seen actually. There are so few films at all that focus on the life of black men, but to have one that focuses on masculinity and homosexuality in the lives of black boys from rough neighborhoods is something really powerful and unique.

I really enjoy the acting in this movie. I’m a big fan of subtle performances, and all three iterations of Chiron are played by boys/a man who really stay consistent in who Chiron is and his quiet performance. I really think that Mahershala Ali is one of the best performances in this film. He absolutely masters the subtle performance.

I thoroughly enjoy the way this film is written. It’s got such beautifully subtle dialogue. There’s no spoon-feeding exchanges. I love the artistry in how naturally this screenplay was written.

As for the directing, Jenkins has some really stellar decisions. There are some scenes that I absolutely adore and I think Jenkins did an amazing job with this film.

I don’t generally talk about sound or the soundtrack or the score in these reviews, because I’m of the school of thought that the sound and music for a movie should enhance but not overpower a film. However, this is one movie I’ve got to say something about the sound for!

The music in this film is incredibly used. I would have never expected the choices that were made in this film to be made as far as music goes, but while the music draws attention to itself, which is usually not a great thing in film, it really works here. There’s something super special about the music and how its used in this movie. It clashes in some places in a way that accentuates the mood of the scene and it’s just genius.

Also beyond the music, the sound mixing is really spectacular here. I’m not big on sound, at all. Usually I don’t even think about the sound design or mixing. In this film, however, I really enjoy the use of the sound of water. The water is important to Chiron’s experiences and growth as a person. The trip to the beach he took with Juan impacted his life so much and I love the way that for the rest of the film, any scene with water has the water louder than it might should be. There’s this recurring motif of water in multiple ways, and both the beach trip with Juan and the fact he had his first intimate experience at the beach carries through this water focus, and the sounds of the film carry that water motif through in such an amazing way.

Look at me, barely even know what sound mixing is, and yet this film’s sound mixing REALLY meant something for me!

It’s good. There was nothing incredibly showy, but I think that’s what’s great about it. I’ve always been a fan of handheld and this film is a beautiful example of handheld done right. It’s not distracting or noticeable, and it makes the film feel more natural. It adds to that real life experience feel of the film.

It’s definitely worth watching, but I do understand why the casual moviegoer might not like this movie. This film doesn’t have a very coherent plot, as in a narrative that has a beginning, middle, and end. It’s a movie more about themes and experiences than a straightforward story.

I also think that to appreciate this film, you have to have an understanding of this type of life and the ideas of masculinity and attitudes towards sexuality in the black community, especially a rough area like the one Chiron grew up in. While I, as you can all tell, am a white lady, so I don’t have the experience of growing up like Chiron obviously. However, as I’m constantly reminded by the internet, I also didn’t grow up in a crazy white place like most of America seems to be. I was always around kids like Chiron growing up. The ideas of masculinity and the attitudes towards homosexuality are different in a mostly black community, and it makes the importance of the movie and the emotional impact more real when you have that kind of understanding.

This film is one that I think is very important and very moving, but I do understand why some people wouldn’t appreciate it as much as others. However, to me, this movie is wonderfully shot, directed, acted, and the subject matter is so important, and I am so glad I finally saw this movie.