I told you guys on a few of my social networking places that today is the day I give you guys my Top 10 films of 2015 list!

BEFORE ANYBODY FREAKS OUT! I have not seen every movie of the year. Chances are if your favorite doesn’t make the list, it’s because I didn’t see it. Don’t start the “Wait, where’s _____?!” comments. It’s very likely I just didn’t see it.

I would honestly say this is one of the best years in film I’ve ever lived through. There were so many good movies this year. I went to the movies more times this year than any year before. There were so many good movies and so many great performances that I’m really looking forward to this years award season. The last two years there were a few standouts I rooted for, but this season I’m sure anything that wins will have deserved it. (Watch me get angry at the results anyways, lol)

So without any further ado, here is my top 10 list of 2015! (It’s important to remember I’m going by “Good” film rather than “Most Enjoyable” for this one. If we were going to talk ‘Movies I Want to Watch Over and Over’ it would be a very different list!

Reason It Made The List: Jurassic World makes the list because, while there is the Nostalgia Factor, and the Chris Pratt bump, this movie was just a well done film. The plot is a really good natural progression from the original trilogy, the characters are all pretty well fleshed out (apart from the parents, that whole extraneous plot line was totally unnecessary), and the actors all did a really good job, especially the kids. It’s just a really good movie.

Reason It Made The List: This one was an unexpected hit for me. I didn’t expect much from this movie, and yet Ant-Man ended up being one of my favorite movies I saw this year. It actually had a ton of comedy, which was the real selling point, and on top of that, there was a lot of heart, too. I don’t really like Paul Rudd, I never really liked Ant-Man the character, and yet this ended up being one of the best of the Marvel films so far.

Reason It Made The List: Marvel movies always score high with me, as a Marvel Fangirl, but this one really was a very polarizing film. There were a shocking number of people who absolutely hated it, but I honestly thought this was one of the best of the Marvel movies. I loved the background we got on Black Widow’s character and Hawkeye’s character, giving us a human side to them. It was so well written, so full of emotion, and just a really good movie.

Reason It Made The List: I love Guillermo del Toro and Crimson Peak is such a great movie. The fact so many people gave it bad reviews is insane to me. The director said from the start that it is NOT a horror movie, and yet people seemed to be upset that it wasn’t a horror movie, so it got terrible reactions. It is a Gothic romance and it is a good one. It was like reading an Edgar Alley Poe story but in a film. The acting was phenomenal, the sets were fantastic, the costumes, the cinematography- basically everything about this movie was wonderful. The story and the pacing were perfect for this film as well. It was disturbing in the best way and the fact it isn’t universally loved is so confusing to me. 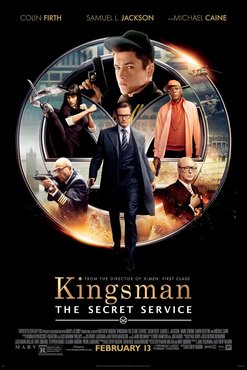 Reason It Made The List: Hey, it may SAY 2014 but it came out in February 2015 in America so to me, it’s a 2015 movie. That said, this is one of my favorite movies of the year. If there was a likable movies list, this would be #1. Since I bought this DVD, I’ve watched this movie about 50 times. Kingsman is such a good film beyond that because of several factors. The one thing I like most about it is the way that you have spies who are shown to be very conscious of the violence they commit. James Bond blows up whole blocks to kill one bad guy and never bats an eye, but even the super villain in this movie says, “It feels fuckin’ awful!” after killing someone. The characters are all very dynamic, the acting is incredible, the comedy is everywhere, and over the top spy films have never included so much heart before this one. It’s just a really good movie.

Reason It Made The List: Because it was a damn good movie, that’s why. The only reason this one didn’t make it any higher on the list is because the ones higher have something that makes them even more special. This movie, however, was such a good film. The pacing is what’s really incredible. Most of the movie is just people sitting around reading and researching, and even though it’s a story that you likely know from the papers back when it happened, somehow it stays suspenseful all along.  The acting is incredible as well. No reason to leave that out!

Reason It Made The List: The negative IMDB ratings on this one are totally transphobia and/or dissatisfaction about a non-trans actor playing a trans character (which is understandable, though I would disagree in this film since it starts with her not understanding she is trans), because this is such a beautiful movie. The Danish Girl tells the story of Lili Elbe (born Einar Wegener) who was the first transgender woman to receive sexual reassignment surgery, and when the film starts, Einar is first facing that he is in fact a she, and let me tell you, Eddie Redmayne better win his second Best Actor Oscar for that because the way he goes between Einar and Lili is amazing. It isn’t the clothes or the makeup, it is the way he sits and stands and moves and makes faces that tells you whether Redmayne is being Einar or Lili. This movie has beautiful sets, the colors are stunning in particular, and the story is beautiful (It’s a trans film that doesn’t end the usual way! Yes, it ends in death, but it isn’t murder, suicide, or AIDs, so I still count it as a win), but the REAL reason this one is so high on the list is because of the acting. Alicia Vikander and Eddie Redmayne both blew me away with this one. Top class film and a must see.

Reason It Made The List: I’ll be honest, this movie wasn’t as likable as others to me. But it’s still a Very Good Movie and for all the reasons it’s good, I can’t ignore it and push it further down the list. The number 1 reason this movie is so good is the simple fact that it’s the most badass feminist film I’ve seen in years. The whole movie is a woman rescuing other women from sexual slavery. Not only that, but the older women kicking ass is literally the only time I’ve ever seen women who aren’t young and sexy doing action sequences. It’s amazing. Tom Hardy is good, too, though! Don’t think I’m downplaying Max and his struggles to become more human again, and Knux struggling with everything he has ever known. It’s just a damn good movie. I expected I would like it because I really enjoy action movies and non-CG special effects and this movie has all of that, but I never expected it to have an amazing story, too.

Reason It Made The List: C’mon, like I could NOT think this is one of the best movies of the year! I thought, even if this movie isn’t great, the nostalgia factor will make it good, but oh man was it such a great movie! All of these actors were practically newcomers and yet they were all SO GOOD! The story was intriguing, the effects weren’t overdone, the acting was amazing, and oh the characters! I love them so much! Also, the fact that the main character and new Jedi is not only a girl but a girl who isn’t sexualized but isn’t super-over-the-top badass is so great. She was such a fun character and she had so much spirit and the way she and Fin worked together was so amazing! I would have loved every second of this movie even if it had been totally unrelated to the original Star Wars films.

Reason It Made The List: This was not only my favorite movie of the year, but I honestly believe it was the best because it is purely science based. Yes, there is obviously stuff that isn’t scientifically accurate, but that’s not the point. The whole movie, all of it, was about NASA and science and it wasn’t just a good movie, it was amazing. It had heart, it had drama, it had suspense, it had comedy, it had great characters and great acting (Matt Damon’s best performance ever, in my opinion), it was all a round just a really great movie. There were moments that nearly brought me to tears, there were moments that made me laugh my ass off, and it was the most visually stunning film I saw all year. Honestly, this was just one of the best movies I have ever seen in my entire life.